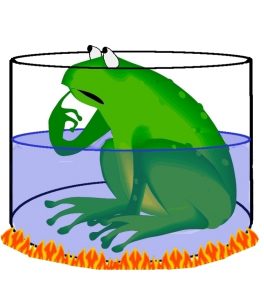 There is an old adage that if you put a live frog in a pot of water and heated it gradually, that frog would just sit in the water and not jump away (even though it could) until the water boils and it is thoroughly cooked.  It may or may not be true (no one has really tried it since the late 1880s), but either way it is an excellent metaphor for certain things.

Some authors have been concerned about the replacement of people with robots, automatic tellers, and other types of automation in the workplace because of the associated loss of jobs (1).  This is one concern, but I want to focus on another.  It is about humanity and interpersonal connection and how dealing with machines instead of people all day may be changing us and our culture.  Changes slowly creep into our lives unnoticed, and before we realize it, like the proverbial frog in a pot of slowly warming water, we become cooked (or otherwise harmed).

Ten years ago, when I first occupied the office I am in now, I would drive to the parking garage and greet the guy in the booth who handed out tickets to people coming in and took money on the other end of the trip.  I would show my monthly pass and he would wish me a good day.  At holiday time, my co-workers and I would bring him a basket of cheeses or chocolates.  In the afternoon on Fridays I would take my deposit to the bank and a teller would greet me with some question about how my week went or statement about the weekend to come.  Then the grocery clerk would comment about the nasty weather as I made my last stop on the way home.

Of course, you know the next part.  Now I drive in and stick a card in a slot and the arm goes up at the parking garage.  If there is a problem, you push a button and a disembodied, grumpy voice tells you that your pass has expired or some such news.  Now you don’t even need to go to the bank, you can take a photo of the check with your smart-phone and hope the internet doesn’t crash before the image gets to wherever it goes.  And you can get out of that grocery store faster by going through the express line where you stick in your credit card, scan your items, and bag them yourself.  And why wouldn’t that disembodied voice be grumpy?  It belonged to someone sitting alone in a windowless room in the bottom of a parking garage looking at twenty-five TV monitors for eight hours a day.

I wonder where that guy at the parking garage is now.  He was nice.  I miss him.  And, although I am a big fan of technology (mind you I love my computer and my big-screen TV), I wonder what it does to us in a society where people already are disconnected from each other and from the planet, to become even more disconnected.  I wonder about a society where people really think that having 500 friends on Facebook is the same as having friends.

I realize, too, that it is up to us who are older and have experienced another way of being to be a bit cantankerous here.  It is easy to dismiss a critique of this kind of “progress” as merely coming from someone old and unable or unwilling to keep up with these amazing, wonderful things.  Or it is easy to submit to the view that “everybody is doing it this way” and “this is the way of the future” or some such thing. If you don’t get on the train it will leave you behind.

I think it is important to check out where the train is going before one gets on!

I recently went into a new branch of my bank.  (I go in to make all my deposits as a quiet, small act of revolt.  I am protesting my increased sense of isolation and aloneness in the world.)  So, here is this shiny new bank branch with its requisite complement of ATM machines stuck in the outside wall.  As I walk in, I notice four glass-walled offices to one side and four shiny new teller windows to the other.  Next to the teller windows are two ATM machines inside the bank.  Then I notice that two of the teller windows are occupied by human beings, while the other two have TV-type screens propped up at an angle where the in-person teller would be expected to be found, and instructions on the screen to begin by swiping your card in the slot to the right.

My first, and continuing, thought is that this is how they (the bank owners) are getting us used to coming into the bank to talk to machines – not people.  The water is slowly heating up!  Next it will be three screens and one human.  Then, poof.  No more humans.

I look around again and realize that the glass-walled offices are each occupied by one blue-suited person sitting at a desk, fingers drumming, staring off into space.  There is one person ahead of me talking to the human teller, but the five other customers at the bank are busy swiping cards and touching screens.  They come and go quietly, never making eye contact or acknowledging another person.

The water is getting warmer!

My plea?  Let us all be conscious of the change going on around us so we can contemplate its usefulness, both short- and long-term.  Let us realize that everything – everything – has both a positive value and a risk.  An up side and a down side.  And let us consider change in light of where we want our culture to go, rather than letting the culture slide away from us without our knowledge or consent, resulting in our increasing sense of disconnection, loneliness and, well, being cooked.

How do you feel when you interact with these disembodied voices and touch screens?  How did it feel to be greeted by a person who recognized you when you went to a bank or a store or a parking garage?  Were there little things in those interactions that made you smile, or frown?  Did that matter to you?  And where IS that parking garage attendant?  Has he gone on to better things?  Or is home looking for a job?  What do we think of that?  How do you want this culture to be?

While you contemplate these things, here are some other reading suggestions:

Turkle, Sherry (1995) Life on the Screen: Identity in the Age of the Internet. NY: Simon and Schuster.

Turkle, Sherry (2011) Alone Together: Why We Expect More From Technology and Less From Each Other.  NY: Basic Books.

Carr, Nicholas (2010) The Shallows: What the Internet is Doing to Our Brains. NY: W.W. Norton.

Sweet, Victoria (2012) God’s Hotel: A Doctor, A Hospital, and a Pilgrimage to the Heart of Medicine. NY: Riverhead Books. (This may not seem to be on the same topic at all, but I think it is.
This book is a beautifully written expose about the effects of recent changes in the view
of medicine from healing art to business)

Kay, Lily (1996) The Molecular Vision of Life: Caltech, the Rockefeller Foundation, and the Rise of the New Biology. NY: Oxford University Press. (A well-researched and written explanation about why we think genetics is as important as we do).

Attwood, Margaret (1986) The Handmaid’s Tale. (Again, you might wonder about the connection, but, I believe it is there in many ways)